Port Officials Say Even With Trade Uncertainty, Now Is Time to Expand

U.S. seaports hoping to benefit from the demands of bigger cargo ships are investing in Neopanamax electric cranes to expand their shipping channels.

Ports in Houston and Savannah have been deepening and widening to boost opportunities to handle more containerized cargo volume coming up the East Coast since the expansion of the Panama Canal.

The three cranes are expected to be operational in the summer of 2021. They stand at 158 feet, and are capable of handling 18,000 TEU-sized containerships.

The facility will have 29 cranes in place once the new ones are up and running.

Through August nearly 2 million TEUs were handled at the port, an increase of 11% compared with the same time last year, port officials said.

“Operationally, our facilities have handled close to 30 million tons of cargo through August, an increase of 7% over last year,” Roger Guenther, executive director of Port Houston, said Sept. 26, citing upward trends in container volumes and steel.

He said he expects to approach 3 million TEUs by the end of this year.

Additionally, as much as $5.5 million is being spent to begin plans to widen and deepen the shipping channel — for the 11th time. The last widening and deepening of the channel was completed in 2005.

Other upgrades to its crane fleet will include 12 new cranes with a lift height of 170 feet by 2027.

A 200-acre expansion on Hutchinson Island (across from its Ocean Terminal) will allow for a significant increase in big ship capacity, accounting for 2.5 million to 3 million additional TEUs, also by 2027.

“Our terminal infrastructure plan adheres to our investment philosophy of always keeping infrastructure ahead of current demand,” said Georgia Ports Authority Chairman Will McKnight. “This will ensure the GPA is prepared to handle the next wave of cargo expansion.”

“The largest vessel that can go through the Panama Canal right now is about 15,000 TEUs and we had one of those come to our port, but the Suez Canal can handle vessels of 20,000 TEUs and larger and our ocean carrier customers are building those ships today — they’re on the water,” said Griff Lynch, executive director at GPA.

He added that those ships are present in Asia and Europe and they could call on East Coast ports within the next 10 years.

“They’re going to come and whoever can handle those vessels is going to be the winner; and if we can’t handle them we’re going to have a problem. It’s not an urgent need today, but it’s a process that we need to start today.”

Dredging resumed Sept. 30 at the Port of Savannah on its shipping channel after an 18-month court battle. The $973 million project has been on hold since March 2018 because a court settlement required the U.S. Army Corps of Engineers to demonstrate it could use machines to offset the loss of dissolved oxygen in the Savannah River. A test run of the machines in August proved successful. Crews are deepening 40 miles of the river to the Atlantic Ocean to accommodate larger ships. 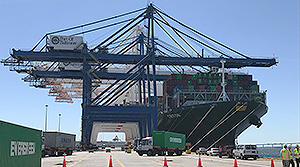 Evergreen Line’s containership Triton arrived at the Port of Baltimore May 24, the largest containership in the port's history. (Dan Ronan/Transport Topics)

Kurt Nagle, president of the American Association of Port Authorities, told Transport Topics that despite uncertainty over trade between the United States and China, the time is right for expansion.

“You do have the timing because of the financial opportunities with low interest rates,” Nagle said.

The Port of Baltimore plans to modernize its Seagirt Marine Terminal. The project will add a second berth capable of serving larger containerships at the port. In May the port saw the largest containership in its history dock there, carrying 14,400 TEUs.

Cold Ironing Up And Running In Major European Port

A German port is up and running with the first European onshore power supply via transformers to feed multiple voltages for cruise shipsFor the Hamburg Port Authority (HPA), Siemens has built a...

Israel’s government has given the final green light for the privatization of the country’s biggest port, the Port of Haifa, Reuters reports.The Ministerial Committee on Privatization gave the...

EcoPorts, the global standard for environmental sustainability in the ports sector, has officially certified an Australian port for the first time.Port of Newcastle has become the first port in...

NGT has directed to pay the amount within two months to CPCB; the move comes after a panel formed by the green bench submitted evidence in a report CHENNAI: The southern bench of National Green...